There may be times where a task that is in production might need tweaking or updating. Perhaps you have a worker that is thrashing your database. maybe it has a memory leak - leading to performance issues. There's no test environment that has the correct (or complete) setup - making this fix seem impossible.

The task to domain feature in Conductor is built for exactly these circumstances. It allows you to spin up another version of the worker, and only allow specific traffic to the "test" worker - while production traffic continues running on the existing platform.

Let's learn how it works. First, we'll construct a workflow that "has issues" that we need to fix:

Let's look at a simple example. Version 1 of the "hello_world" workflow (featured in our codelab) has one task: 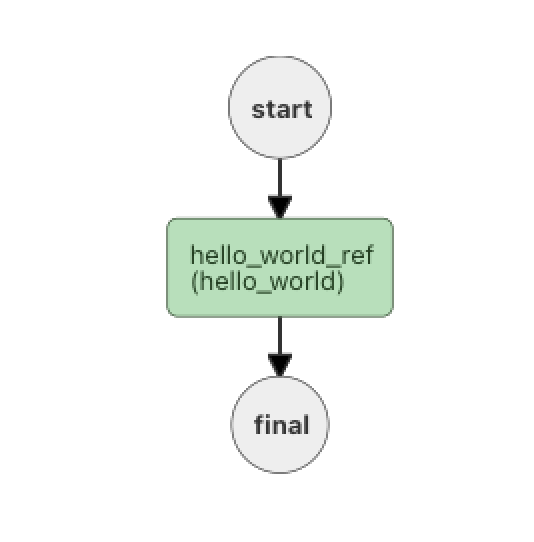 This task is performed by a Java worker in the OrkesWorkers GitHub repository, and all of these workers are available for usage on the Orkes Playground.

The Hello World worker has the following code:

You can test in the Orkes Playground: 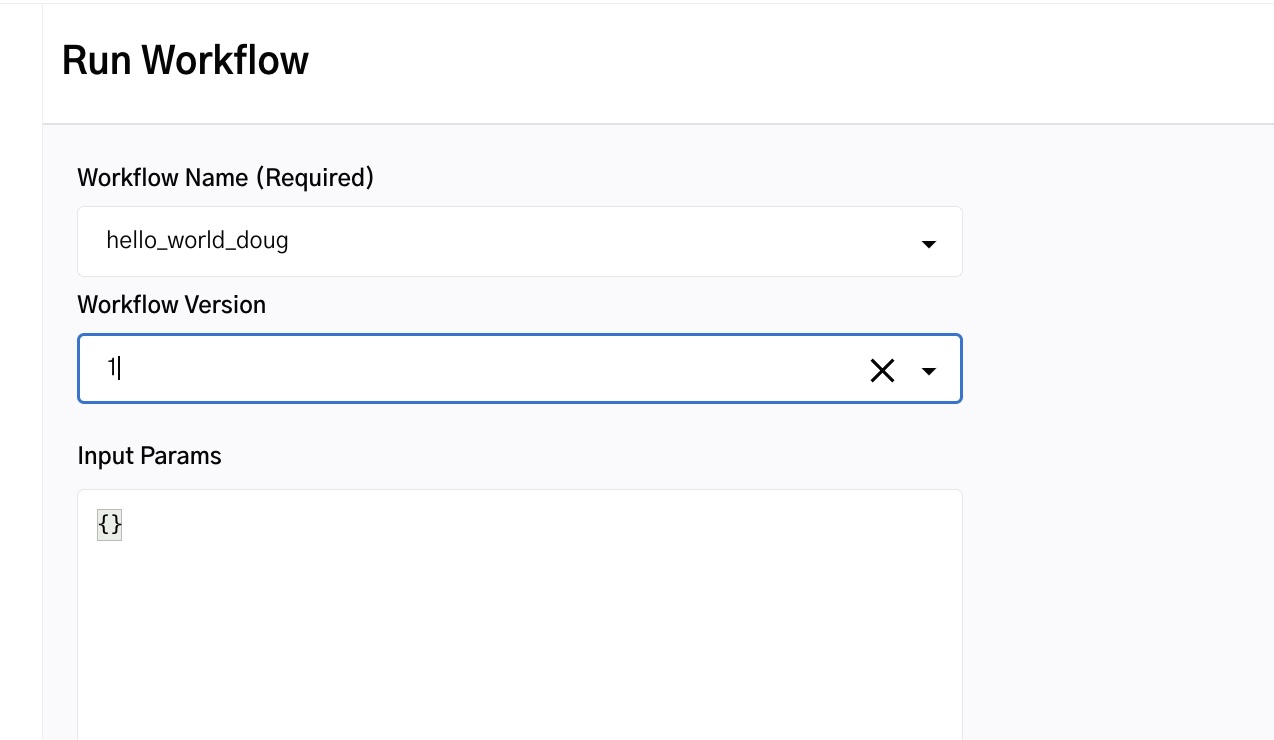 When you click Run Workflow, the workflow adds a job to the "hello_world" task. This task is hosted by Orkes, and when it is picked up, returns the expected text. The workflow is then concluded with the following output:

Running an alternate version in production​

What if this hello_world worker is thrashing the database, or has a memory leak that is impacting performance? A new version must be created that fixes the problem. We can use Conductor's Task to Domain feature to spin up another version of the task - and run it in the same production workflow (without impacting production traffic!).

To show an example of how to do this, we'll spin up a second version of hello_world on our local computer. We start by cloning OrkesWorkers to our desktop. Following the instructions in the codelab, we set up application permissions:

Before we start the workers and begin polling the server for work, we need to slightly modify OrkesWorkersApplication.java. Change TaskRunnerConfigurer to appear as follows:

In lines 3&4 we created a HashMap taskToDomainMap that has one entry: mapping the "hello_world" task to the domain "doug".

We then add this to the Configurer .withTaskToDomain(taskToDomainMap) in line .

Now, when we run OrkesWorkersApplication, a new worker will appear in the playground. Click Task Queues in the left nav, and search for hello_world. There will be 2 Workers shown with polling active:

The orkesworkers is our "production" version, and the Dougs-Air.home (with domain doug) is our "test" worker.

Currently, both of these workers are identical and will have the same output. To show the difference, we can edit our local version of HelloWorld.java. In this example, we just change the output to say "Hello World from Doug's computer!" (that's on line 17 of HelloWorld.java). In reality, you'd be fixing your performance issues, or whatever was driving a change to the task code.

Now, when we run the workflow, if we leave the Task to Domain box empty, the workflow will run in "production", but if we add:

the workflow will run with workflow with our "test" worker on our local machine.

When the taskToDomain is set to doug, the workflow input/output appears as follows: 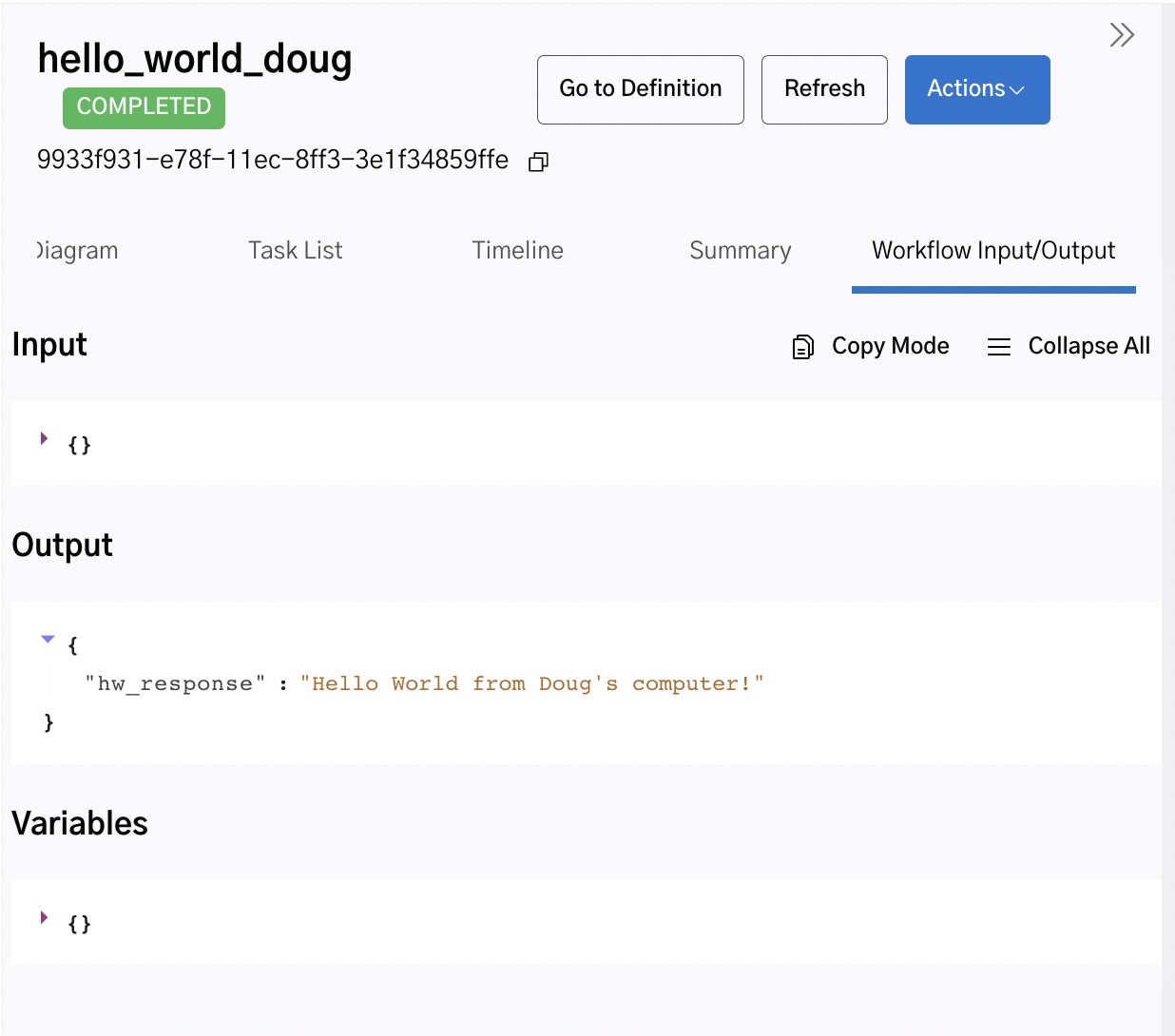 You've just run your production workflow, but bypassed one of the production tasks and run on a test version of the task!